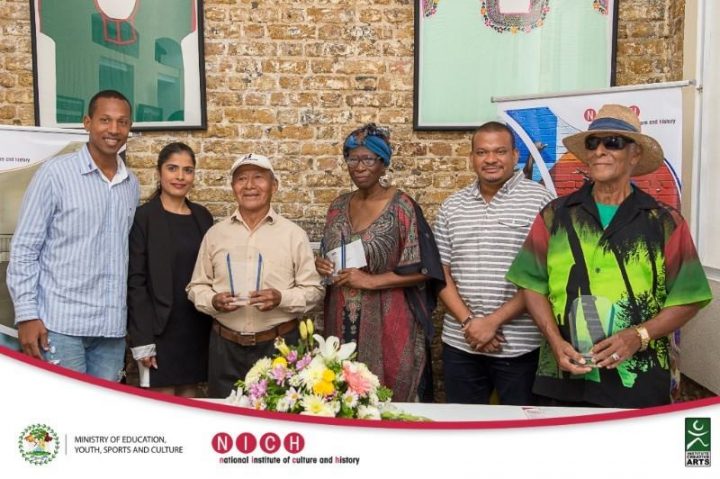 In a VIP ceremony at the Museum of Belize in Belize City on October 19, 2018, three Belizean artists were given the award of “Artist Emeritus” of Belize and official recognition of their achievements by the government.

The ceremony was led by Patrick Faber, the Deputy Prime Minister of Belize, and Sapnah Budrani, president of the National Institute of Culture and History, who presented the Artist Emeritus award to Florencio Mes, Myrna Manzanares, and Gerald “Lord” Rhaburn in front of a packed crowd of cheering enthusiasts. Budhrani told a packed hall that “Belize is blessed with so much diversity, and these living heroes have made us laugh, dance, and appreciate our country’s rich artistic traditions.”

Florencio Mes is of Maya origin and is known for his sublime skills on the harp and his relaxing, soothing music. Hailing from San Pedro Colombia in Toledo District, Mes is the last surviving member of the “Three Kings,” three legendary Maya musicians from Central America.

Gerald Rhaburn, better known as Lord Rhaburn, is a well-known calypso, soca, reggae, and brukdown (breakdown) musician famous for songs such as “Pump it up” and “Gumagarugu Water” that stem from his deep Garifuna roots. He gained international recognition in the 1970s when performing with the Lord Rhaburn Combo. In 2004, the Lord Rhaburn Music Awards were first held, an annual award show that recognizes outstanding Belizean musicians.

All three Artist Emeritus award winners were given a plaque and a $500 monthly government stipend.

Speaking during the ceremony, Minister Faber said, “On behalf of the entire nation, we thank you for your lifetime of contributions to culture in Belize. We hope you will take your monthly stipend to continue to produce your art to further enrich generations of Belizeans to come.”

Also present at the ceremony were Dana Rhamdas of the National Creole Council, Hilario Mes, son of Florencio Mes, and Karen Vernon, the theater director at the Bliss Center for the Performing Arts. Attendees were also treated to a live phone call of congratulations from Dr. Linda Mcartha Sandy-Lewis, better known as the calypso musician “Calypso Rose.”

The staff and management of Chail Mar heartily congratulate these magnificent artists and thanks them for their contributions to Belizean culture.